As I write this, I’m entering the third week of my Unhurried Productivity experiment. In case you missed it, here’s what I’m doing and what I hope to learn from it.  I’ve also been posting daily updates on Youtube.

If you’ve been following those daily clips, you’ll know that I’ve been angsting about not being as productive as I would have liked to have been. Sure, I’ve had bursts, but nothing that’s been sustained.

Today, I had a breakthrough on two fronts: 1) I was massively productive and 2) I had an epiphany. I often advise leaders to find ways to combine delivery (making stuff happen) with discovery (learning and insight) to help them and their teams do their best work. This was one of those days for me.

My epiphany: it’s not about always being in the flow state. It’s about being able to monitor and move between states fluidly. In fact, without the other states, we may never even reach the flow state.

You might remember the original model looks like this (eagle eyes will notice that I’ve updated the bottom right box to call it ‘Reflection’ rather than ‘Observation’): 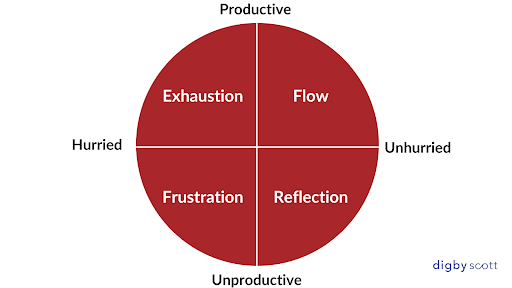 It’s a useful model, yet it’s also somewhat simplistic. I’m beginning to appreciate that all four quadrants have both value and limitations. So I’ve nuanced the model: 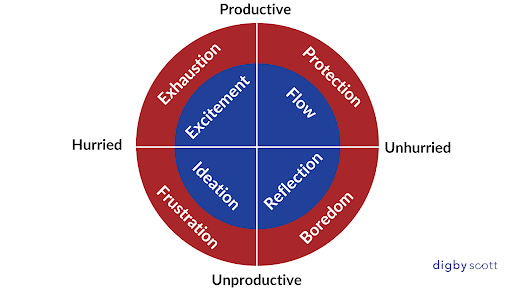 Top left: when you’re busy making stuff happen and you’re on a roll, it’s exciting. You’ve got a mountain of stuff to get through, you’ve got the adrenaline going, and you’re smashing it. Until you’re not. Keep going for too long here, and you’ll hit the red line of exhaustion. Boom. Crash.

Bottom right: many people equate this box with taking a holiday. It’s often seen by Type-A personalities as one to avoid, because you’re not achieving anything. If you’re someone who’s hooked on doing, this box can get boring quickly. Yet, as reams of research points out, creating regular space for reflection, for observation, and for rest is fundamental for wellbeing and productivity over the long term. For example, Annie Murphy-Paul shows in her book The Extended Mind, we perform better when we get out of the busyness and into our bodies and experience nature.

It’s not just about taking a holiday. This is stuff we can build into our daily routines. Yet many people don’t know how to optimally be in this box. I’ve spent a lot of time here in the past two weeks, and it’s been both relaxing and perplexing.

As we’ve seen before, we can end up in an infinite loop between these two boxes. We go hard and fast. Then take a break and escape for a while. Rinse and repeat. It’s one way of living our lives. But it’s ultimately not that generative or satisfying. 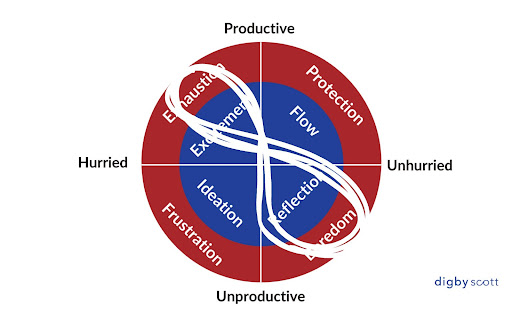 Bottom left: I originally called this the Frustration box because it’s where you’re full of ideas and energy, yet you don’t seem to be able to get any traction. This is where my centre of gravity has been for the past few days, and I’ve not enjoyed it much. In my mind, I’ve labelled it as ‘bad’. Yet, as I’m coming to realise, being here is an essential part of the creative process. It’s where the brain comes alive. It’s where ideas take root, looking for a way to come into the world. My notebooks are full, my head is buzzing, and I want to do something with it all. That’s not bad, it’s good. It’s ideation at work.

Top right: This is the coveted flow state: effortless productivity with absolute mental clarity. We’ve all experienced it, yet it often seems as elusive as the end of a rainbow. I feel like I could be entering this state now. I’m well rested, with lots of ideas and a clear sense of purpose. I’m writing like crazy, and I feel in the zone. But it would be all too easy to say that this is nirvana: once you’re here, you’ve made it. Yet flow is fleeting. Paradoxically, if I try too hard to protect this state, I’ll lose it. It’s not something I can bottle. It’s merely something I create the conditions for, and immerse myself in it when it arrives.

If you’ve tracked this journey around the model, it looks something like this: 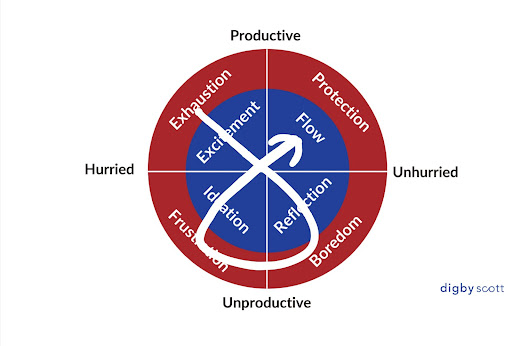 Here’s the thing: the trick is not to be in flow all of the time. The trick is to know where you are, and how to optimise your time and energy where you are. We are not stagnant creatures. Neither is the process of Unhurried Productivity.

Get fluent and fluid. Fluent in how to optimise your time in each space. And fluid in how you deliberately move between them.

More to come on this idea. I’m just getting started!